Yesterday morning I hopped a bus and went to San Rafael to pick up my brand spankin’ new 2006 Mazda3 hatchback S Touring Edition. In Velocity Red. With an emphasis on the Velocity. And on the Red. 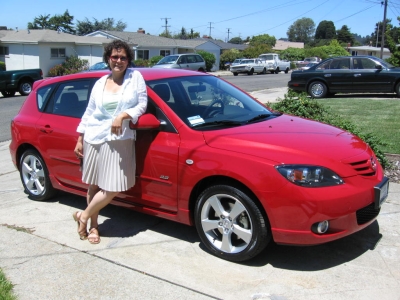 It sparkles. It shines. It goes far faster than it ought to. The picture above was taken by Marc when I came to show off my new toy. It’s not my best photo ever, but look at that car! It’s so cute it almost breaks my heart.

Since I know Guy will ask, the first song played in the new car was “In Your Eyes” by Peter Gabriel, the fantastic long version off of his “Secret World Live” album. Not “Harvey the Wonder Hamster.” Sorry. The second song was “Niner Two” by Don Ellis from “Live From Montreux”. [ed. note: this song + this car + I-5 would be a very bad combination.] The first entire album was Patty Griffin’s “A Kiss In Time.” It probably should have been something by Eddie From Ohio, but I was kinda rushed when I was grabbing discs.

I’m still very sad that my old car had its life prematurely ended, but being able to replace it with this hot little number really helps cushion the blow.