A little over a week ago the sound went all wiggy on my MacBook. At first it would only play through something plugged into the headphone jack but that rapidly degraded to not playing sound at all.

I was disturbed by this turn of events. Sure, you might think, “Oh, it’s only the sound. That’s no big deal.” And you’d be right to do so. But a bit of research showed that this particular sound problem is directly related to a fairly vital logic board and is also a known leading indicator of dire problems to come. My 2008 MacBook—the first MacBook I ever owned and one of my essential and treasured possessions—was obviously dying. 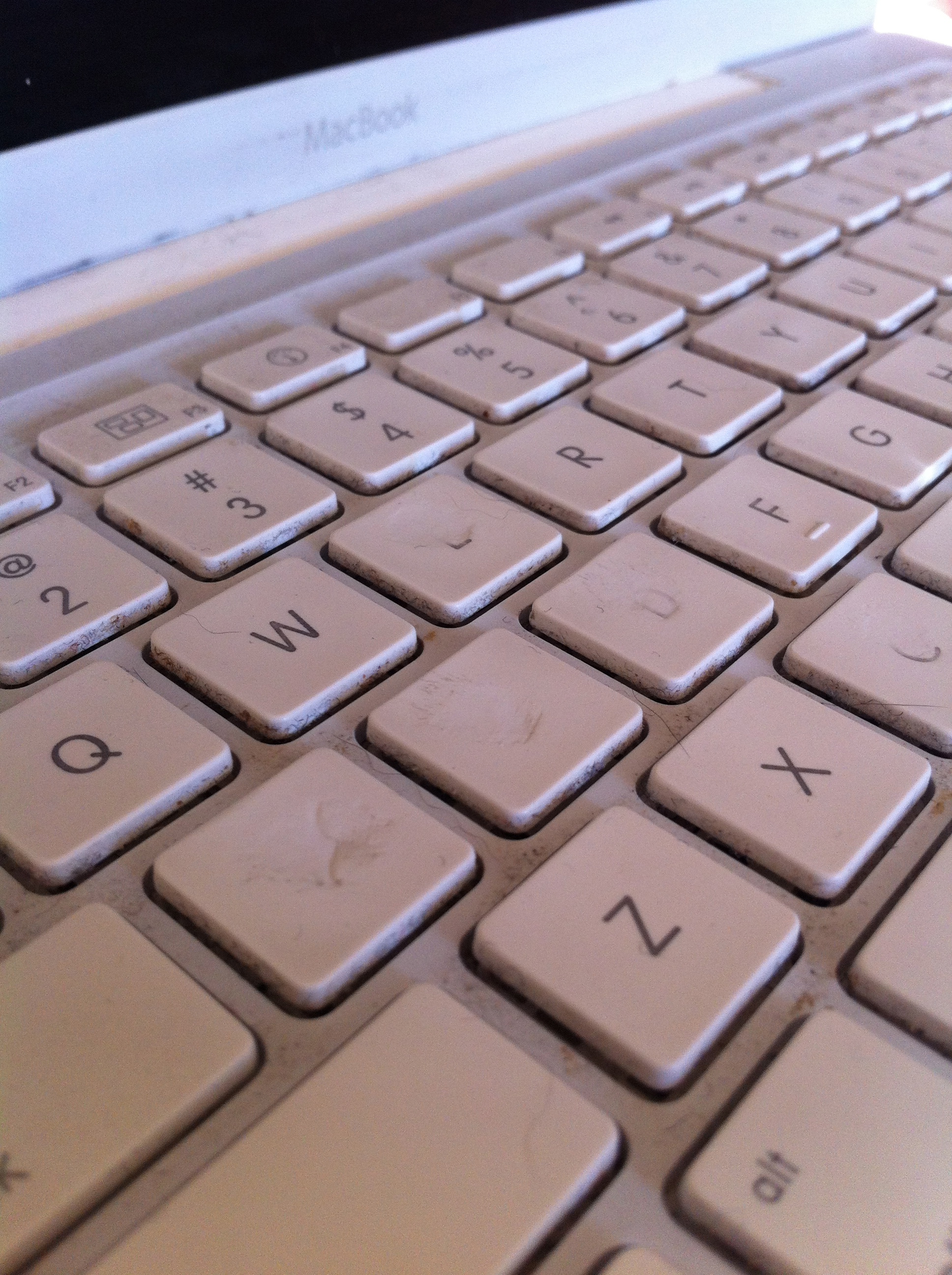 I could live with a MacBook lacking sound. I have an iPad, after all. As my all-but-dedicated Netflix machine it had my entertainment needs more or less covered. And most of what I do on the computer is reading/writing. Ain’t much sound required there. Not like I’m editing movies or anything. That said, what I can’t have is an unreliable machine. Especially now. Research showed it was going to cost between $400 and $600 to get this logic board fixed. On a machine that’s going on four years old. A machine so well-used that the A, S and E keys are not only worn off but actually have physical divots from my fingernails striking them. Yeah, I’m sure I’d get a spectacular return on that investment… Should I just buy a new one? Should I get this one fixed? Should I suck it up and just wait for my beloved MacBook to gasp its last? 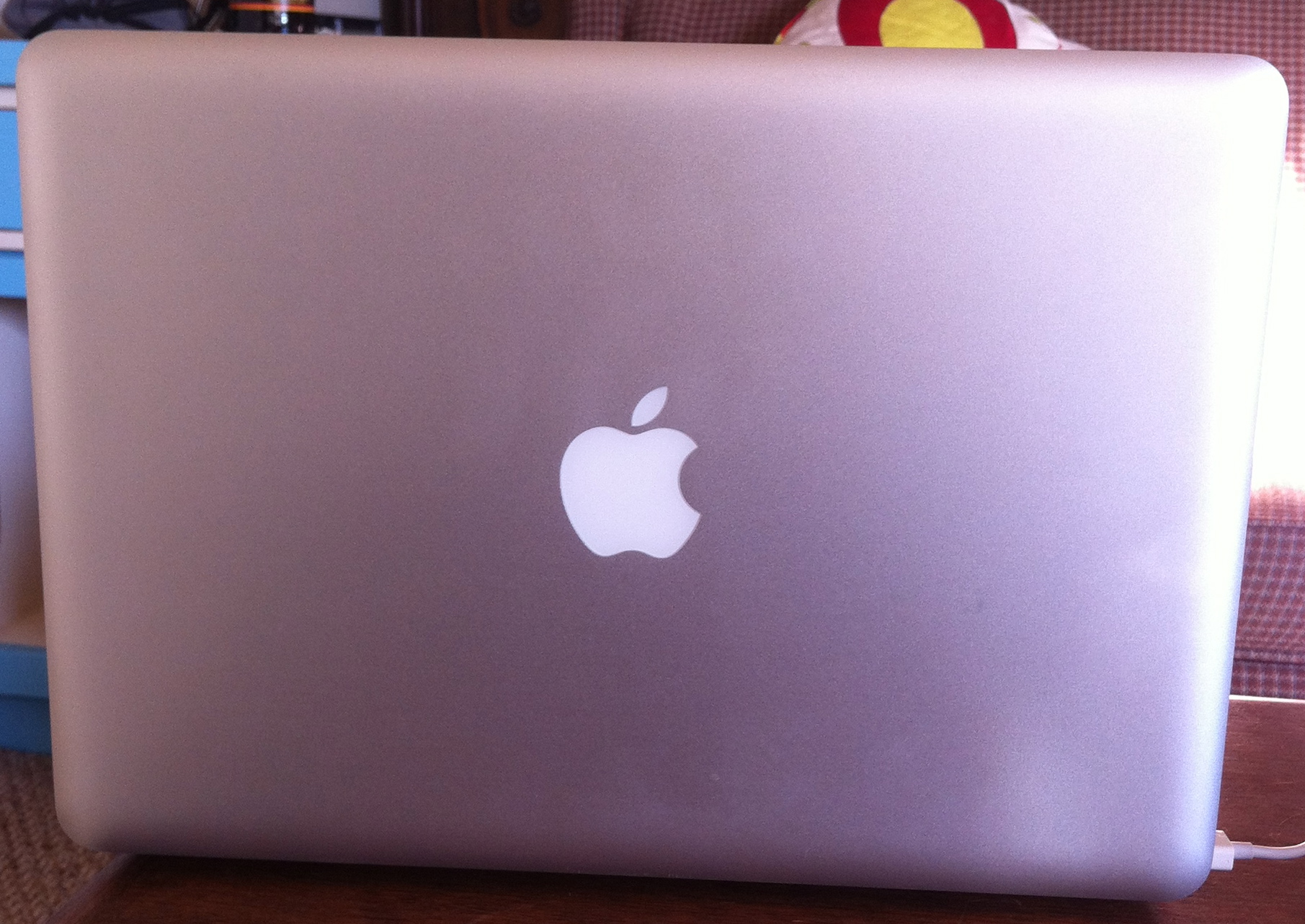 And so I did what anyone should do with this sort of decision: I slept on it. When I woke I knew what I had to do. That morning I marched into the Apple Store just after opening. Fifteen minutes later I marched out carrying a new 13″ MacBook Pro. After all, what’s the use of having credit if you can’t use it in an emergency? Yeah, about a thousand bankers just punched their fists in the air at that line…

Anyway, so, yes. I have a new MacBook. I could have gone cheaper and gotten a Windows machine (on which I would have immediately installed Ubuntu), but I’ve come to deeply respect the reliability and “It Just F*cking Works”-ness of my MacBook in the past four years or so. I can still install Ubuntu on it via BootCamp (a project for later this week!), so I’m a happy camper. Except…

If you look at the pic of my original MacBook at the top of the post you’ll note all the stickers. These were collected over the course of the years I traveled with that machine and I’d become very fond of them. Unfortunately there’s no way to transfer these memories to the new MacBook Pro. What to do? 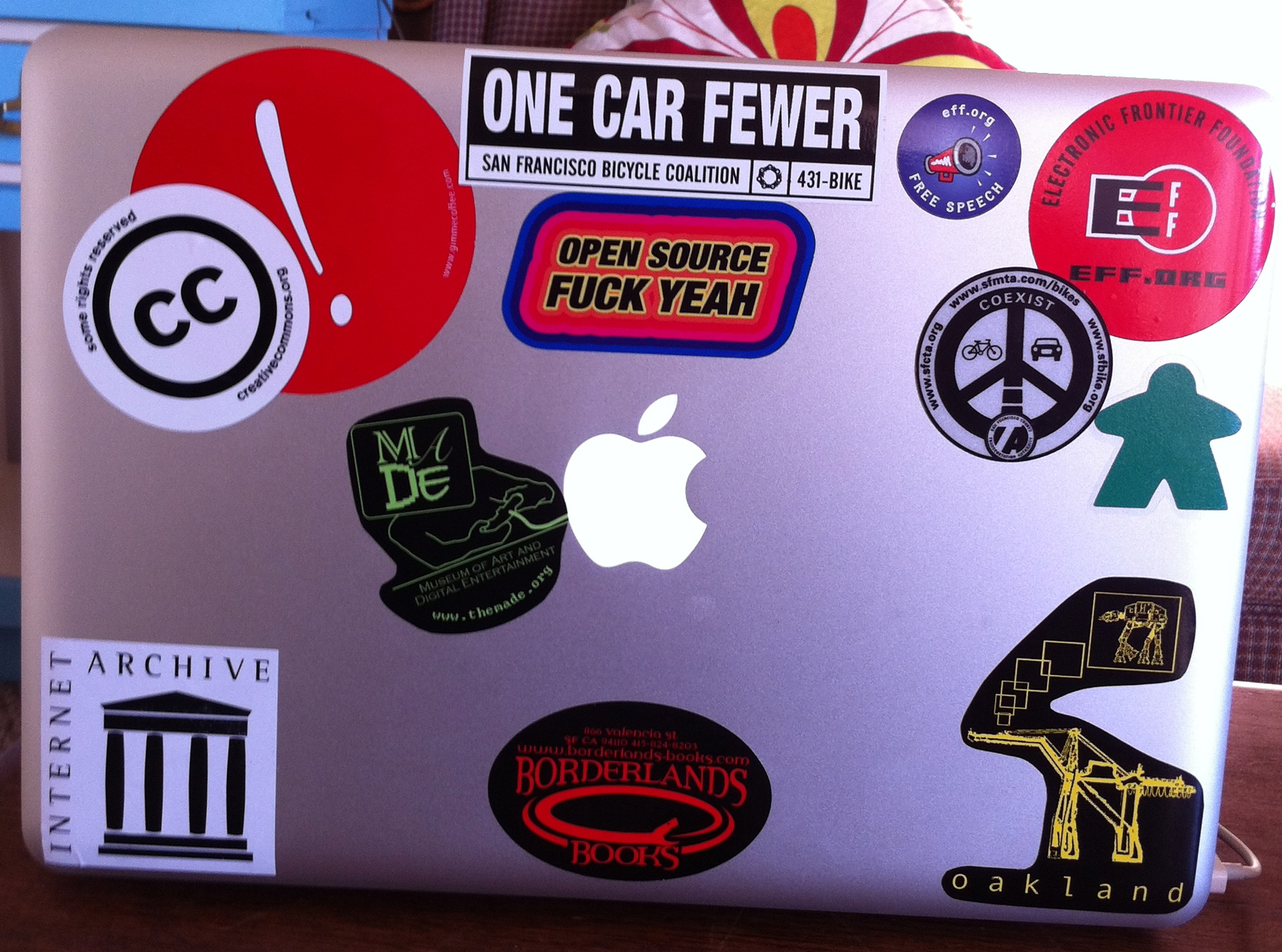 What you do is contact your friends and see whether they have any spare stickers which will add some character to your shiny, new machine. And, boy, did they. Granted, some of them were from my own meagre sticker stash. Still, a number of people really came through for me in the past week. AR brought me the Internet Archive sticker. The S-B clan contributed the stickers for EFF and the SF Bike Coalition. SD sent my favorite one (“OPEN SOURCE / F*CK YEAH”) all the way from Portland, OR. JS helped me score the all-important and centrally-placed sticker for The Museum of Art and Digital Entertainment. The others were in my private stash and somehow hadn’t been lost over the intervening years since acquiring them. I’m particularly pleased that even after placing this collection I still have room for MOAR! For instance, I notice a distinct lack of GitHub-iness on there. And nary a Mozilla to be seen. This must be remedied!

I liked my new MacBook Pro before but I admit that since adding the stickers earlier today I feel a lot more affection for the little guy. Before it was a machine. Now it’s my machine.