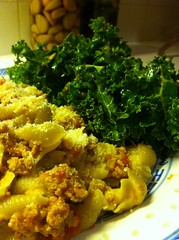 Ragù Bolognese is, in my opinion, the reigning king of pasta sauces. Sure, there are other splendid ways to dress a noodle, but to me none are as decadent as this slow cooked meat sauce. This is a flavor which could never come from a jar. It is special enough that I’ve only made it two or three times, including today.

And when I say “special enough” what I mean is “Holy Emmenthaler, but this takes forever to cook.” From start to finish, today’s batch took eight and a half hours of prep and cook time. This is a dish you make when you’re already planning to spend all day indoors. Thankfully I work from home (my keyboard a mere four or five feet from the stove) allowing me to devote the time today. 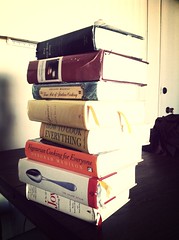 I did a lot of research before buying the ingredients for my Bolognese. What I learned is that I don’t like most of the recipes available, either in my book collection or on the web. Some were all beef (wrong). Some didn’t include vegetables (wrong). Some were primarily tomatoes (wrong). All of them made too little (wrong).

The thing is, if you’re going to spend over eight hours making something like this, you may as well make a lot. This is a dish which takes the same amount of time for a double batch as for a single, so why not just go large from the start? Bolognese freezes remarkably well, so eight hours now will provide you will meals for weeks to come.

The recipe here is one of my own devising and is pre-scaled to a double batch. Halve it if you wish, but frankly I can’t imagine why you would.