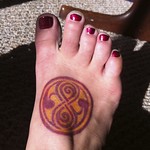 No, it’s not henna

“Comparatively, tattooing is not the hideous custom which it is called. It is not barbarous merely because the printing is skin-deep and unalterable.” ― Henry David Thoreau, Walden

If you’ve seen me at any time since mid-May of 2012 you already know this but it may come as a surprise to others: I now have a tattoo.

No, this is not some sort of mid-life crisis thing. It’s not a “You just turned forty” rite of passage. I’ve wanted one for a while but needed to be one hundred percent sure that the tattoo I got was one I’d like for, well, ever. I was finally one hundred percent sure, so back in May I set up the appointment and took the plunge.

The design I finally selected is the Seal of Rassilon. I chose it first and foremost because I am a Whovian but, secondarily, because I believe it’s a lovely design in its own right. So while it acts as a way for me to locate fellow members of my geek tribe of choice—as they are the only ones who will recognize it—it also just looks good to the “normals.” 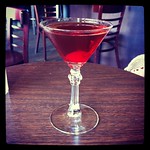 As for the location, I’d never pictured anything but the top of my foot, even before I’d decided what I wanted. Yes, before you ask, it

did hurt. It hurt like bloody hell. The process felt very much like how I’d imagine it would feel if someone were carving into your foot with a small knife, which isn’t too far from the truth. Despite that, I didn’t flinch once and I’m very proud of that fact. Though I suppose the Manhattan I downed just before showing up for my appointment may have contributed to that bravery…

My artist, Joe{.broken_link} at One Shot Tattoo{.broken_link}, is a great, kind, funny and skillful man. I pelted him with questions all through the process and he was brilliant, answering them all with details galore. He had reservations about the design. No, that’s not accurate. He had reservations about the fact that I didn’t want the design outlined in black. He warned me that the design may not be as sharp but I was resolute and he was up for the challenge. The skin of the foot is difficult to work with and doesn’t like to take ink, so I’ve been back twice since May to get touchups on the places where the ink was forced out. I wasn’t going to post photos until it had settled down and was complete. It finally qualifies, so now it can be unveiled to the world. 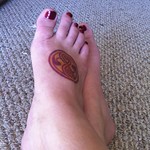 Seven months on I have to say: I’m well pleased. Most of my year is spent barefoot, toting shoes in my bag should I need to pop into a restaurant, so I get to look at my tattoo all the time. I love seeing it. I love getting compliments on it. I love best when someone recognizes it, points, and exclaims, “OMG! You have a Seal of Rassilon on your foot!”

I joke “My next tattoo will be ‘No It’s Not Henna’ in a circle around this one.” It’s the first question most anyone asks when they see it. “Wow! Is that henna?” I quietly sigh then take a breath and—for the twentieth time—explain that, no, it’s not henna. It’s real.

Jokes aside, would I do it again? Yeah, I think I would. It’s not a cheap habit to pick up, I gotta say, but if I think of something else I’d like this much and I have the cash lying about then I’d be glad to do it. After all, I do have another foot…

You can see in-process photos by clicking on any of the images above.