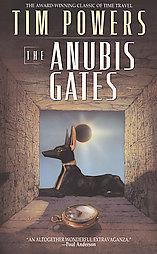 A few months ago I received a second-hand book review from friend Z. “I was speaking with X and Y and they both said that The Anubis Gates was the best book they’d ever read.” Holding the opinions of X, Y and Z in high regard I naturally had to seek out this book.

The story is primarily that of an academic who finds himself trapped in an earlier time and the things which happen to him there as he tries to return to his own time. I won’t say more than that lest I accidentally introduce spoilers.

This book was an easy read but, I’m afraid to say, not an exciting one. Perhaps it’s due to my abundant exposure to time travel stories thanks to my addiction to Doctor Who but nothing in this story caught me by surprise. I foresaw all the plot twists far in advance and found myself continuing to read simply to prove my guesses correct. The characters were not interesting to me and the primary character was so weak and whining at points that I found myself actively disliking him. There were some inventive approaches to the plot elements but those weren’t enough for me to become engaged in the story itself.

Overall the book was a dud for me, which is the only part of reading it which truly did come as a surprise. X and Y are intelligent people of good taste and I’m fairly stunned that I didn’t enjoy the story as they did. The next time I see them I’ll have to ask what they saw in it. It’s possible that I just missed some complexities or subtext which helped to make the whole greater than the sum of its parts.