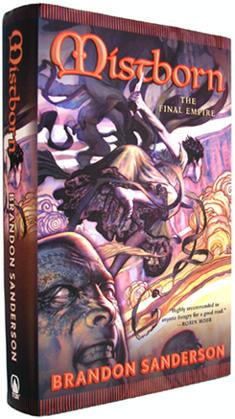 Two different friends recommended Mistborn: The Final Empire to me. Unlike The Anubis Gates this book wasn’t portrayed as anything other than good entertainment so my expectations for it were much more realistic.

I’ve read a fair number of fantasy novels in my life so I’m familiar with the standard toolbox and Mistborn did not disappoint there: abused but talented orphan, dashing hero, diabolical overlord, downtrodden populace, mysterious and often earth-given powers. There’s going to be a training scene (a’la all good cheesy kung-fu movies). There’s going to be some romance. Some people will die and good will triumph in the end…but only it’s the battle not the war since you want to turn this into a series.

It may sound like I’m about to bag on this book but those who think so are wrong. Overall the description of “good entertainment” is an accurate one. Yes, it followed the formula but it had some very interesting gems hidden among the chestnuts and that made the story move along at a good pace and kept me engaged the entire time.

Was it high art or anything approaching what the snooty call “literature?” Heck no. But it was a good way to spend a few hours, which is a lot more than I can say for most movies and TV these days. I’d recommend this book for those who just can’t bear to watch another reality program and want to just lose themselves in another world. Though they’ve yet to officially make it onto my list of books to read I’ll undoubtedly pick up the subsequent books in the trilogy at some point.