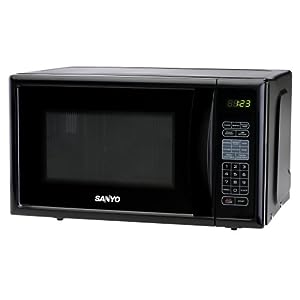 And with the purchase of a new microwave I’ve returned to modern American culture. Well, OK, I still don’t own or watch TV (and don’t intend to) so perhaps I’m still not fully returned.

Back in August of last year I got rid of my behemoth of a microwave. It was really great regaining all of that counter space in my kitchen.

However a year on I finally recognized that I hadn’t been eating nearly as well since I rid myself of the thing. Sure, it was quick and easy to reheat leftovers on the stove but it wasn’t quick or easy enough, it seems. I was cooking much less often simply because I didn’t want to deal with the leftovers. I found myself subsisting more often on crackers and cheese, quesadillas and take-out. My health was taking a hit and I had to do something about it.

Yet…there’s still that issue of space. I really didn’t want to give up my counter space again. What to do?

I used this as an opportunity to get rid of more stuff. After all, if a new object (microwave) was going to enter the house then something else would have to leave in order to make room. The stuff I chose to get rid of was a large pile (two large piles, really) of cookbooks which I never use. This freed up enough space on the shelf that I could slide a very small microwave in there.

After an extensive search I found the nuker above (click the pic to jump to the Amazon listing). It’s just the perfect size to fit in the aforementioned shelf space. Unfortunately I’ve found that it’s also underpowered and heats unevenly but, well, it’s good enough for leftovers.

I’ve had my new microwave for about a month and so far I’m pleased. I’m cooking again and eating much better in general. Overall I think the “no nukes” experiment was a success, even if I did end up coming back into the microwave fold. It was very interesting to see how I reacted to not having that modern convenience on hand. It was also very good to remind myself that though it is convenient it’s hardly necessary.