Yesterday I turned off the MacBook, set the iPhone to airplane mode and sat down to get some serious work done.

At a certain point it was time to turn on the computer again and capture in digital what I’d written in analog. The wifi isn’t working on the MacBook! It’s 100% fine on the iPhone and the iPad but the MacBook? No dice. The MacBook is connected to my wifi network but all connections time out and die. It also no longer sees any of the many other networks in my neighborhood. It’s like it’s a zombie connection: it looks like it’s alive but it’s really not.

In truth it had been on the fritz just before I shutdown the MacBook. It had been fine in the morning when I’d been using the laptop from the sofa then crapped out right as I hooked it up to get work done. That was annoying but I figured it’d just come back the next time I booted up.

After a quick trip to the hardware store to get an ethernet cable[1] I plugged the MacBook directly into the router. That worked fine, so I started applying all of the system updates that were pending.

That didn’t work as expected. At some point the App Store[2] completely wedged, requiring a force quit. That, in turn, left the system in a bizarre state such that most apps wouldn’t function. This led to me having to do a complete reinstallation of Mountain Lion.[3]

There. The wifi is now back. All is right with the world. The MacBook went to the sofa with me, where it normally stays in the evenings.

Today everything was fine first thing in the morning from the sofa. Again wifi crapped out just as I’ve moved the MacBook to the daytime workspace. That can’t be a coincidence.

This time I started up a ping to google.com and left it running while I moved the MacBook to the daytime workspace and plugged in the external monitor. Here’s what I saw: 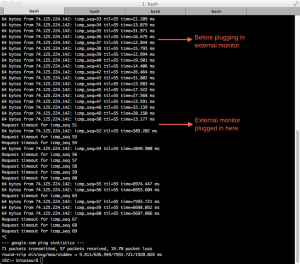 The results of the ping to Google.

If you’ve ever used ping you can very clearly see where the MacBook stops being able to reach google.com. That’s the exact same moment when I plugged in the external monitor. Right after I stopped the ping the wifi died completely.

Frankly, this all perplexes the hell out of me. I’ve been using this setup for months now. Nothing has changed. I hadn’t updated or installed any new software or system updates. I hadn’t made any hardware changes. Nada. Things just suddenly decided to stop playing nicely together in the sandbox.

To say this is inconvenient would be an understatement.

Now that I know what the problem is I can start researching to see why it happens and whether there’s any way to fix it. I really don’t want to go to the Genius Bar if I can help it.

In a word: HARUMPH.

[1]: Seriously? I didn’t have an ethernet cable lying about here?! What the hell? Where did all the damn things go?! Back to reading
[2]: I honestly loathe this program. It’s ugly and bloated and most of the times I’m forced to use it something goes wrong. Now all system updates must come through it, which just pisses me off. Back to reading
[3]: Kudos to Apple for allowing a reinstall of the operating system without also requiring a reinstall of every other app or loss of the user data. That made the day almost tolerable. Almost. Back to reading