Please see yesterday’s post, Cold Brew Comparison: The Madness and the Method, for the introduction to this cold brew coffee experiment.

I successfully enlisted three other coffee-loving friends—Eric, Jen, and Josh—to come over and be taste testers, bribing them with promises of brunch and abundant coffee. Two other friends (Chrissy and Kris) attended as non-coffee-drinking spectators. 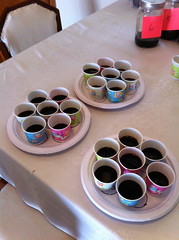 Once the tasters arrived they were given a choice: Taste blind? Or would they prefer to know what they’re drinking? It’s a testament to the culinary adventureness of my friends (my Culinauts!) that they unanimously agreed to the blind tasting. To make it a little more interesting, I told them that whoever guessed the most secret ingredients would win a bag of BrewPony coffee.

All coffees were tasted at room temperature and undiluted. There are far too many ways to enjoy cold brew and there was no way we could (or should) try them all. Instead we would taste them in as pure and unadulterated a state as possible. We all agreed that several of the brews would likely perform significantly differently if served hot.

Here are the tasters’ comments for each brew, summarized: 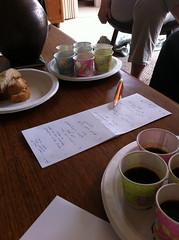 When asked which was their favorite, three out of four tasters selected Brew #4 (lemon peel). The fourth taster selected Brew #3 (mint). Everyone agreed that Brew #6 (soy sauce) was a solid second place.

Oh, and Eric successfully guessed four of the six ingredients. As he’s already a happy BrewPony subscriber he gifted his prize coffee to Josh.

So, what have I learned? Well, for one thing mint is a very polarizing flavor where coffee is concerned. My tasters either (predominantly) loathed it or (one) loved it, saying it was very refreshing. Despite that, I think it’s safe to say that the blanket statement that the addition of mint makes for the best cup of cold brew is a busted myth.

Regardless, this experiment has opened up new horizons of cold brew. Some of the brews (vanilla, for instance) could be improved by altering the amount of flavoring ingredient. Others, like the lemon peel, were quite lovely as is. After the tasting we brainstormed additional ingredients we could try. Cardamom was a popular suggestion. Buddha’s Hand Citron was another. One taster suggested doing a vertical of brews made with several different kinds of soy sauce, just to see what happens. Frankly, I’m stunned that no one suggested bacon. That one kinda seems like a no brainer to me. There’s really no limit to the options we could try.

This article wouldn’t be complete without mentioning that after the official tasting we did try several of the brews diluted with boiling water. I’ve since tried the remaining ones the same way. I learned that: 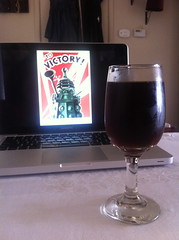 As you can see, serving method can have a large effect on the end result.